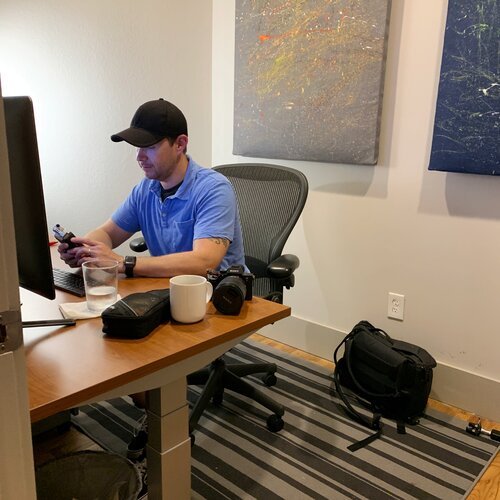 Andy Fogarty is the Creative Director for GMB Fitness, a proud father of four girls, and a FireWorks founding member, meaning he was here way before the paint fully dried in our space.

He spends his days editing videos, managing filming and footage, strategizing campaigns for GMB Fitness, and just generally being one of the kindest people we’ve ever met.

“Anything video-related. That’s all me.” 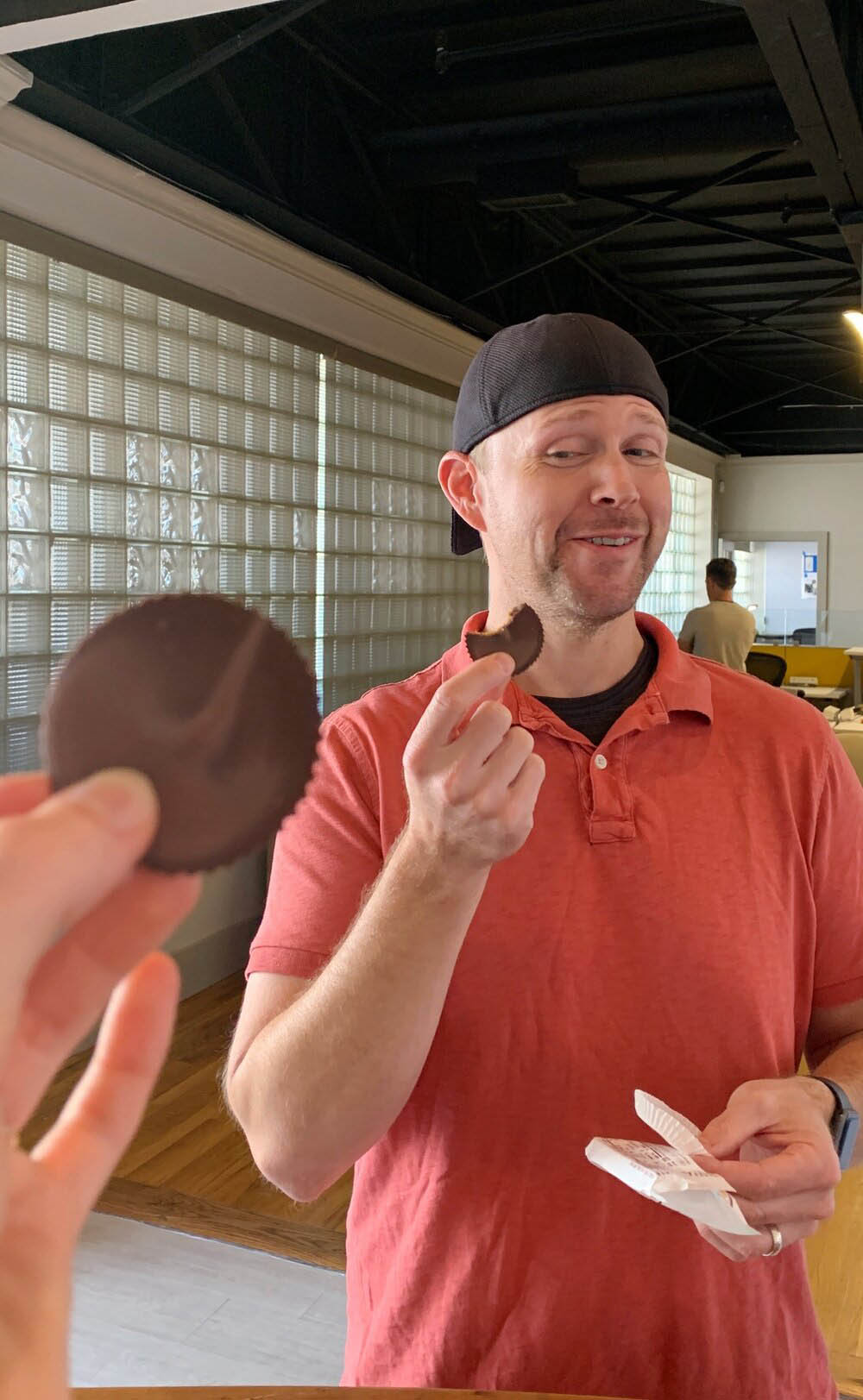 Proof that Andy is the kindest human ever: Here he is voluntarily sharing his Justin’s Peanut Butter Cup with me.

On his current work:

Right now, we’re creating custom software and rebuilding our entire curriculum at GMB. I’ve spent a lot of time thinking about user experience on the video side.

At GMB, we have this overarching principle of physical autonomy; it comes down to mobility, flexibility, and strength. We want you to have the physical freedom to live your life, whether that looks like gardening, playing with your kids, or hiking and climbing.

The principle extends to our software. It’s interesting because most apps are designed to suck you in, but we really want the best for the person using our software and don’t necessarily want them glued to their phones.

With video editing, some people think that you can “just edit it together” – that there’s no thought towards the emotion or story being told, or even that there has to be a story.

I have people come up to me sometimes and say, “I like your style; make me a video like you make,” but I can’t do that with just a lump of footage. There has to be more intention there.

I’m pretty good at reading people without being in person (this comes in handy because Andy’s team spans the globe, making face-to-face meetings rare).

I believe that everything is marketing, so it’s important to be able to read between the lines.

I don’t necessarily have a problem with complaints or bad news; I try to use it as an opportunity to learn: What did I miss in the communication? What did I not communicate? How do I need to look at it differently?

It sucks when it happens, but I also don’t want things to go perfectly all the time, because then I don’t feel challenged and would get bored. 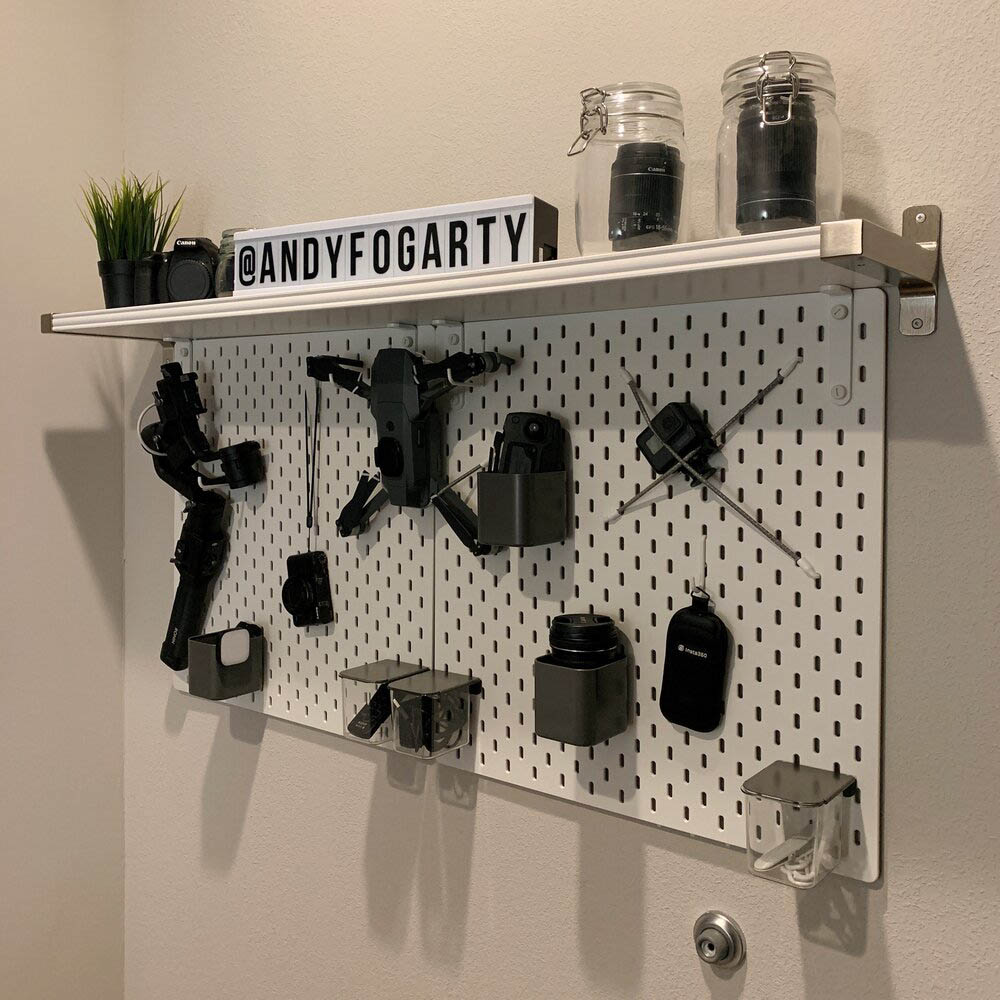 Andy’s office is full of thoughtful touches, like this custom shelving solution for his camera equipment.

When I’ve hit a slump, I usually turn to music for inspiration, or anything physical. I’ll go for a run; I also train Jiu-Jitsu. It sort of clears your head.

Maybe it’s the release of endorphins, but I’m always able to come back and look at something creatively. It’s easier to start from a clean slate.

I love anything having to do with a camera. I’m not a photographer, really; I’m not great at setting up and taking photos. I consider myself an editor.

I try to take note of what I find interesting and take photos of what’s around me, usually random people on the street. I enjoy editing to try to accentuate those things that I notice. That’s not always easy to do, I think.

On why he loves FireWorks:

FireWorks is a beautiful space and I really like that it’s geared towards creatives.

Being able to film [GMB’s online courses]  here is pretty awesome. The Fishbowl almost exactly matches where we’ve filmed before, but it’s right there. I hate location scouting, so that is perfect.

It’s also exciting to be part of something that’s just starting!

On what makes or breaks the coworking experience:

For me, privacy is really important if that’s what you’re paying for (Andy works out of one of our micro offices).

Security, good coffee, and clear communication are also high on the list.

I hate that they tore down all those trees, but it’s cool to see time and money going into the Marietta Square.  Historic districts are cool, but sometimes if they stay just historic and nothing’s ever put back into them, they start to feel dead.

I grew up wandering the Square, so it’s especially neat now to work here and see it from a different perspective.

I think there’s lots of talent in the underground creative scene, but it’s hard to find those people.  Sometimes when I’m walking around Marietta with my camera and see other people with cameras, we kind of nod at each other, but that’s it.

Creatives and bureaucracy don’t really mix, so an association or directory or something like that might be terrible, but it’d be great to have some way of finding other creatives in the area. I don’t know how that would come together. 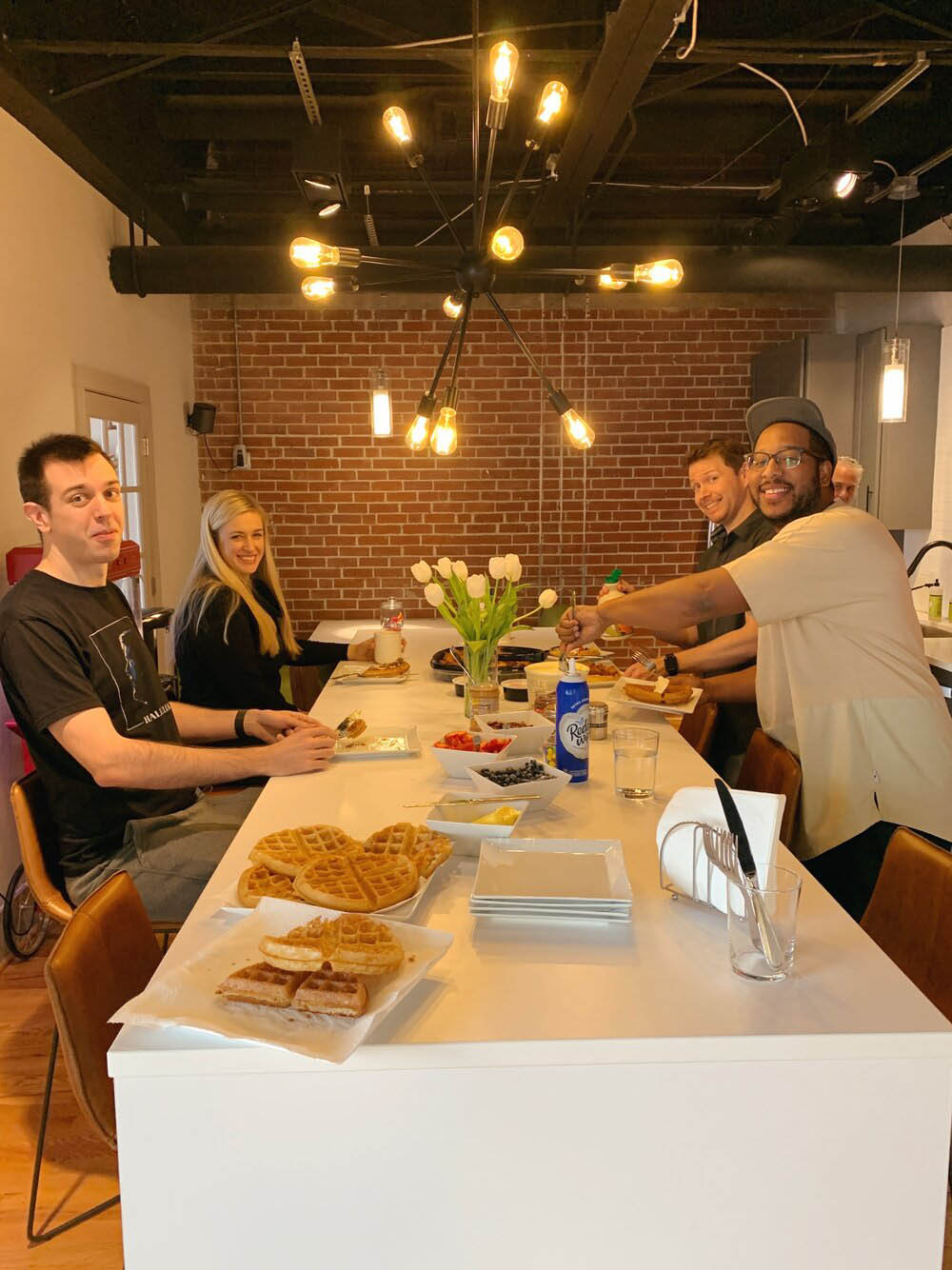 Andy and a few other members at a Waffle Wednesday event.

On his favorite local spots:

The brewery is pretty cool, too! I grew up here and remember when Glover Park Brewery was a lighting company. So much has changed and I really like having something like that nearby.

Thank you, Andy! We’re so glad you’re here. If you wanna hang with Andy and other creatives in Marietta, you can schedule a tour of the FireWorks space right this way.

An Ode to the Humble Lunch Break

If you're not taking advantage of your lunch break, your mental health,…

Four Ideas to Bond with Your Team in a Coworking Space

In a sea of emerging co-working spaces, offices need to harbor a…