Six Amazing Startups that Started at a Coworking Space 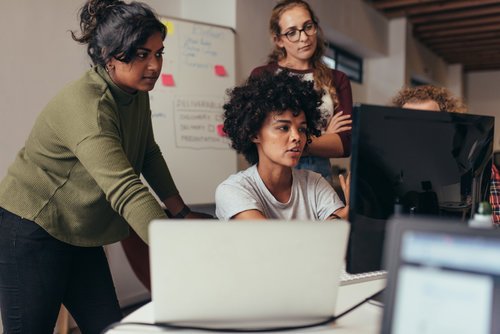 Every company has to start somewhere, and some of the world’s largest companies got started in a coworking space. If you’re just getting started with your business and feel like you’ve got an uphill climb ahead of you, rest assured that many successful, global companies have been in your shoes before. Here, we’re going to cover six startups that began in a coworking space and are now worth billions.

1.      Spotify Started in a Coworking Space

The world’s most popular music streaming platform had humble beginnings. Today, it features 191 million users, 87 million subscribers across 78 markets, and is rumored to be worth $25B. In fact, the company is today’s largest revenue driver for the music business. But where did they begin? The platform originally began in Stockholm in 2006 but was officially launched in 2008. They got started in the United States in RocketSpace, an infamous coworking space out of San Francisco.

2.      The Impact charity: water Has Had Since Starting in a Coworking Space

The non-profit company – charity: water – strives to deliver safe drinking water to millions of people all over the world. Founder Scott Harrison spent two years on a ship off the coast of Liberia and saw first-hand the effects of unclean drinking water. Upon his return to the United States, Scott wanted to make an impact on the world’s drinking water crisis, which included about 1.1 billion people.

Scott was on a mission and started the company in a small apartment in Manhattan. As the team grew, charity: water moved to the coveted coworking space – WeWork – in New York. Since its beginnings in 2006, charity: water has raised $320 million, funded roughly 30,000 water projects in 26 countries, and provided 8.4 million people with clean drinking water.

Considering the social media platform is only eight years old, its progress since being in a coworking space has been tremendous. Today, it has over 1 billion monthly users and 500 million daily users. Since Facebook bought the company in 2012 for $1 billion, the app is estimated to be worth more than $100 billion as of June 2018.

Instagram founders Kevin Systrom and Mike Krieger originally called it Burbn, and it functioned as a check-in app. This is when the company was working out of DogPatch Labs in San Francisco in 2010. It later turned in to the photo-sharing social media platform it’s known for today.

4.      Hootsuite Began in a Coworking Space

This useful social media scheduling platform got started in a coworking space in San Francisco back in 2008. Ryan Holmes was an advertising agency owner and was frustrated that he was having to log in and out of social media platforms to execute social media campaigns. As a result, he created Hootsuite, then called BrightKit. As of March 2018, the scheduling tool had over 16 million users and raked in $50 million in capital. Its popularity has grown to include celebrities and organizations including: Martha Stewart Media, HBO, the Obama administration, Facebook, Zappos, The Gap, and more.

Do you remember the days before Uber? Co-founders Travis Kalanick and Garrett Camp realized the frustration of hailing a cab in Paris, and they knew it could be done better.  What if, they thought, you could request a ride with the tap of your phone? The pair launched UberCab out of San Francisco in March 2009, with the first ride taking place in the same city on July 5, 2010.

Uber has brought a new era of car- and stress-free living. It’s also one of the most popular side hustles or part-time jobs for many today! The famous ride-sharing company got started in RocketSpace out of San Francisco. Its team of eight were some of the first coworking members at the infamous hub. The company quickly grew after receiving backing from Google Ventures and Fidelity Ventures.

The founders of this company all had the same challenge: They had a great idea with no funding to get it started. Insert crowdsourcing. Danae Ringelmann, Eric Schell, and Slava Rubin started the company in 2008 to help fund film projects. Showing off the power of networking, this team came together to leverage the breadth and depth that the internet offers.

The trio got started in a coworking space in San Francisco and has continued to grow ever since. The company has helped 10 million people worldwide, covering 235 countries and territories, with 47% of exceeding campaigns being run by women.

Are you ready to take your startup company to the next level? Get started in a coworking space just outside of Atlanta. FireWorks is off the Marietta Square and is the perfect inspirational space for your startup. Contact us today to schedule a tour.

You’ve nailed down a coworking space, and they’ll cover the essentials to get…